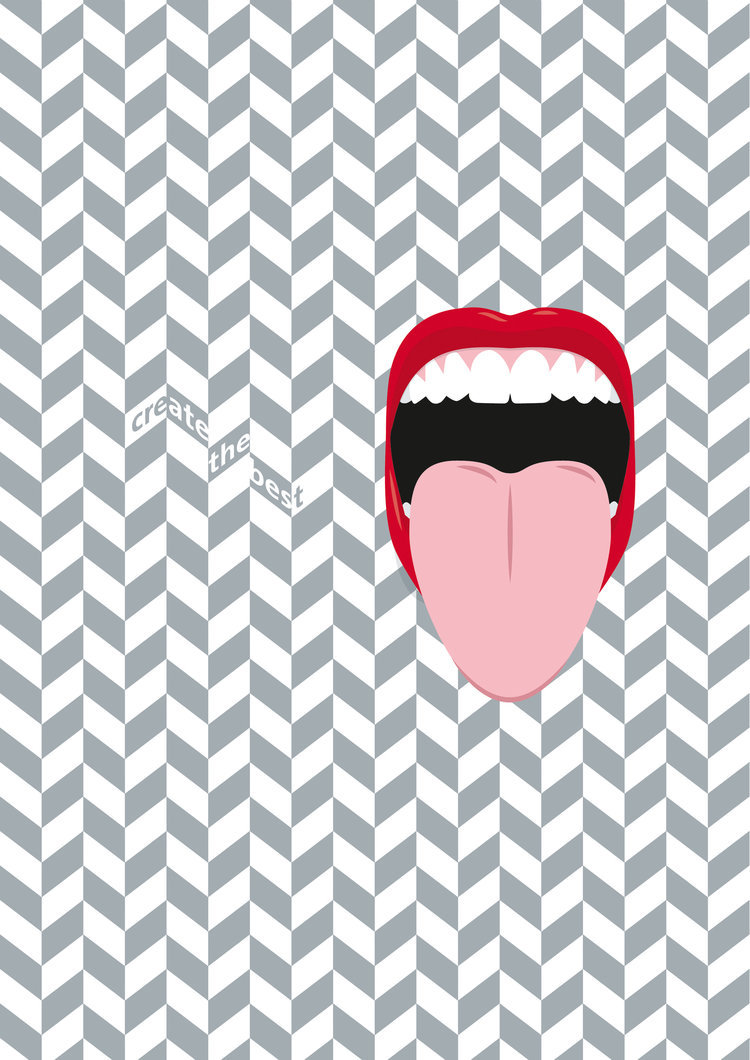 Abutment teeth and implants do not tolerate horizontal forces over the long term very well. This is certainly a truism but extensive, and above all heavy, contacts on buccal cusps are still observed in many restorations. Long-term stability can be achieved using BC contacts, a fact we have known for a long time. The question of how we can achieve this for hybrid prostheses is more relevant than ever. The scientifically-founded answer has long been available thanks to full dentures. To emulate this approach is neither plagiarism nor looking to the past.

Who provided the answer? A Swiss! But not the person whose three-point contact influenced generations of dentists and dental technicians. From Zurich? Yes, that’s right but he came after the “three-point eminence”. It was Professor Albert Gerber (1907–1990) who paved the way for what prosthetics has since become. The “autonomic occlusal stability” he formulated, along with much more, was incorporated into prosthetic dentistry and can be considered in principle to mark the birth of prosthetic tooth-to-tooth occlusion. His research results on the neuromuscular control of the mandible, the causes of craniomandibular dysfunctions (CMD), ultimately also swept aside the guiding principle of the wax-up technique that prevailed at the time. Decades later, tooth-to-tooth occlusion revealed the occlusal option for current implant-supported hybrid prostheses. The lingualized occlusion concept developed by Gerber with its narrow support areas on the upper palatal cusps (bulge/pestle) making contact with the lower lingual fossae (hollow/mortar) is a morphological reversal of the occlusal surfaces analogous to the bony condylar guidance and leads to autonomic occlusal stability of the individual teeth or implants. The term lingualized occlusion is based on lingual as a blanket term with no topographical differentiation between palatal and lingual.

Systematic tooth-to-tooth loading with a transfer of the occlusal force towards the alveolar process with no destabilizing effective A contacts minimizes horizontal movements on the implant or abutment tooth. From our perspective, this is undoubtedly a far-sighted solution, as though Gerber anticipated today’s hybrid prosthesis 40 years ago. The patient case presented here shows how modern and advantageous this occlusion concept actually is.

As is often the case, the patient has experienced many years of suffering due to a lack of retention of the upper and lower jaw prostheses. Despite several new total upper and lower jaw restorations, secure retention, particularly in the upper jaw, could not be achieved. After clinical and radiographic findings indicated that the prerequisites for implant restoration in the upper jaw were satisfied (Camlog), the patient opted for an upper jaw hybrid denture and a lower jaw full denture. The neutral occlusal position  provided support here. 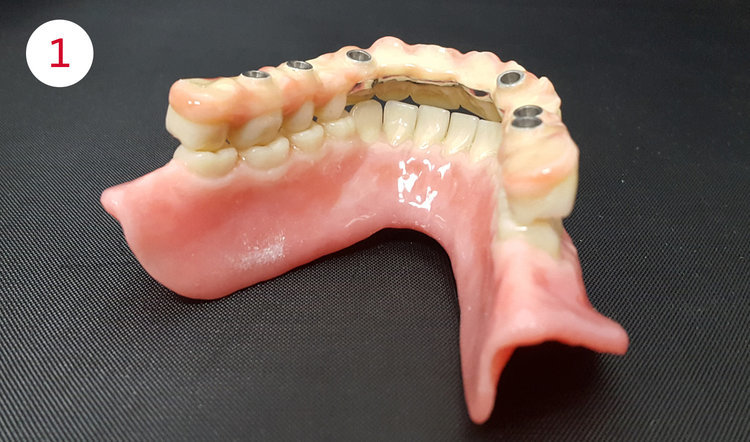 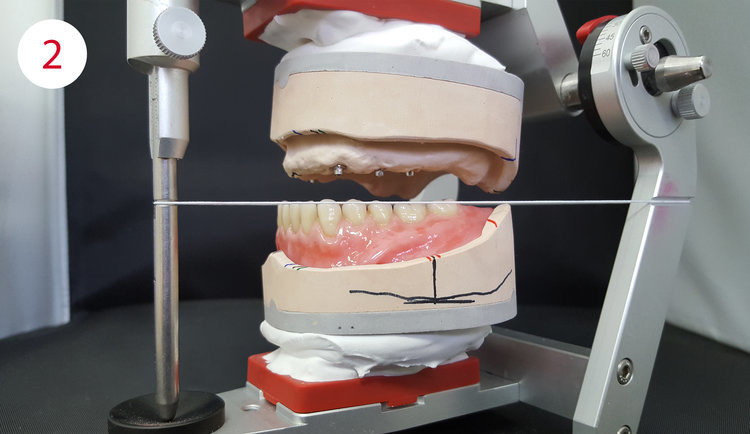 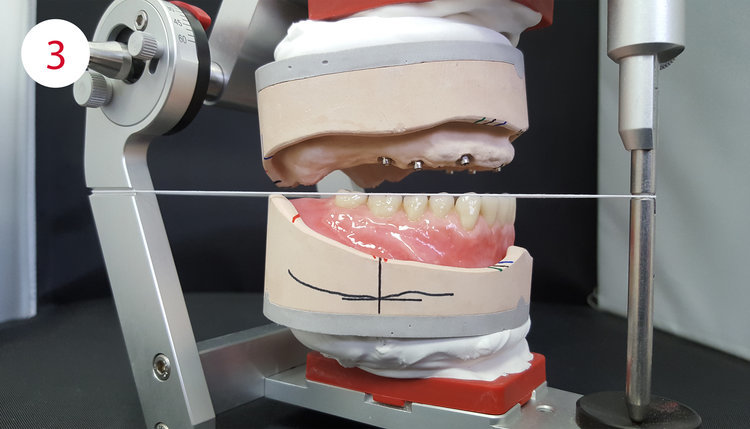 DETERMINING THE GREATEST OCCLUSAL UNITS IN THE LOWER JAW

Using model analysis, the loading zones were estimated so that the occlusal load is transferred to the bone to implant interface and thus onto the upper and lower alveolar process, enabling skeletal compensation. The model analysis for the Gerber concept was developed by Peter Lerch for dental technicians and takes into account any atrophy of the two jaws. This approach is critical for the longevity of the occlusal relationship. The upper jaw is the static counterpart to the lower jaw which is under neuromuscular control. For this reason, the alveolar ridge contour is transferred to the left and right outside edges of the model using a profile compass. In the process, the compass is kept perpendicular to the midline of the ridge during the drawing. The lowest point of the ridge contour, which marks the left and right occlusal center, is formed by the two contact points with a parallel line to the occlusal plane. These two points indicate the position of the first molar and thus the location of their central fossae as the abutments for the upper supporting palatal cusp. A tolerance range of about 1 mm in the mesial and distal directions is indicated by two small red marks.

Not only transversally directed shearing movements but also sagitally directed forces increase the risk of abutment or implant loosening due to static and dynamic contacts that cannot be compensated over the long term. Contacts that are too far distal upon jaw closure, especially with an ascending mandibular ramus, can also cause the lower jaw to slide forwards and downwards. Gerber referred to this phenomenon as “proglissement” or forward displacement. This is often indicated clinically by pressure points in the anterior sublingual area. The lower jaw model is oriented in the articulator. By positioning a 22.5° angled template parallel to the occlusal plane, the intersection with the alveolar ridge contour is determined. The molars do not make contact distal from this point and thus there are also no contacts with the protrusion facets. They cause the forward displacement and thus the detrimental protrusive movements on the abutments or implants.

The models are oriented in the articulator for this purpose. It is irrelevant which jaw is analyzed first. The basis structural static (black) is first determined: In the upper jaw at least the area around the first premolar is marked on the midline of the alveolar ridge as well as the center of the tuberosity. Both points are connected to form a line and extended to the front and back edges of the model and marked there. In the lower jaw the distal reference is always the middle of the retromolar pad and these two lines are again extended to the edges of the model.

OUTER AND INNER ZONE: HOW FAR IN THE BUCCAL AND LINGUAL DIRECTIONS?

The outer zone is then defined (blue). Buccal to this line there must not be any contacts in either jaw. For this purpose, in the upper and lower jaw, on both sides of each of the canine and the first molar point is extended as a line on the front and back edges of the model and marked there.

The inner zone (green) is then marked, which is the lingual limit of the palatal and lingual inclines of the cusps, the tooth outer surfaces. The course of the line is also marked on the outer edges of the model. In the upper jaw the two inner zones travel through the canine point and the pterygomandibular raphe. In the lower jaw it marks the Pound line and is extended to the edges of the model and marked there.

SUPPORT CORRIDOR BETWEEN THE UPPER AND LOWER JAW

After the loading areas have been determined in each jaw, the occlusal bilateral buccal corridor is then determined. The aim is to place the static contact areas in the interalveolar alignment and thus obtain a secure bony abutment for the occlusal force absorption. Buccal or oral contact areas on the other side of these lines have a destabilizing effect on dentures as well as on implants or abutment teeth. The BC contacts associated with the lingualization subsequently create a narrow contact corridor. ABC contacts are broader transversally, A contacts in particular on one jaw side are not uncommonly outside the interalveolar bony abutment line. For this step the model placed in the articulator is considered from the dorsal aspect.

Fig. 4: Narrow corridor for the centric stop, BC contacts – the first premolars have buccal cusp contact as defined by Gerber 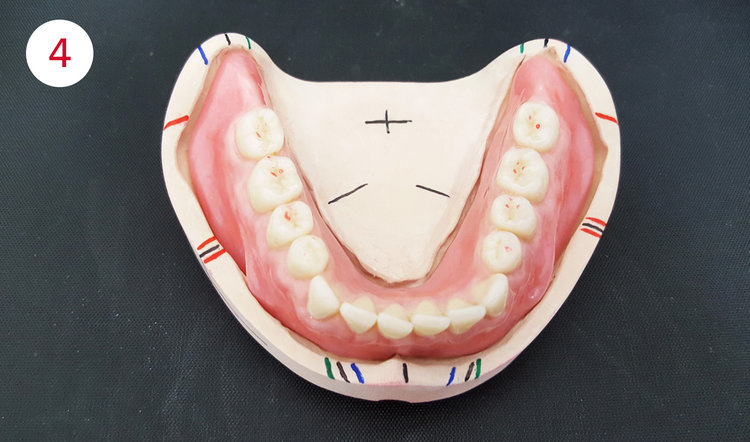 Fig. 5: Definition of the final support line and the outer and inner zones

HOW FAR IN THE BUCCAL DIRECTION SHOULD THE CONTACTS BE?

The common outer zone is the bottom one here. If the A contacts would lie buccal of it, then the positional stability of the lower jaw denture would be particularly at risk on the left side of the patient. Contacts within the defined common outer zone area, the upper and lower jaw dentures are stabilized in occlusion by the opposing sections of the alveolar ridge. On the right side of the patient the lower outer zone is again the common reference for the same reasons, even if they are closer together here; it includes the common covered transversal load-bearing bony area.

HOW FAR IN THE LINGUAL DIRECTION WITH THE LOWER POSTERIOR TEETH?

The two lower jaw lines are defined as the common inner zone in this case because they mark the statically relevant Pound line and the necessary limit for tongue freedom in the lower jaw. If the lower posterior teeth position extend beyond it towards the upper inner zone, the freedom of the tongue to move would be restricted and there would be a negative impact on the gingivally positioned lower jaw denture. 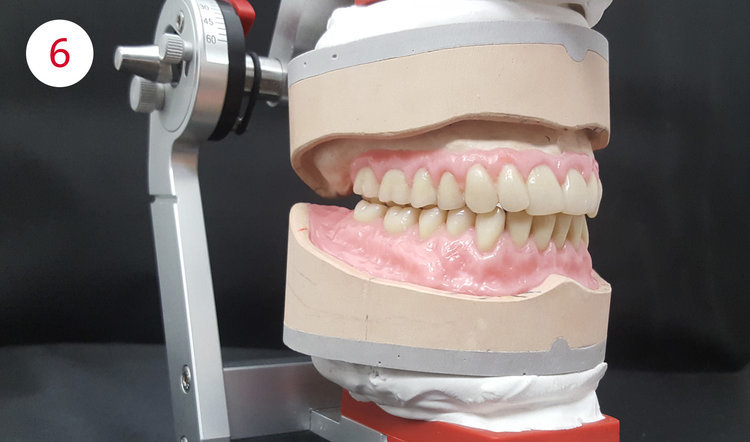 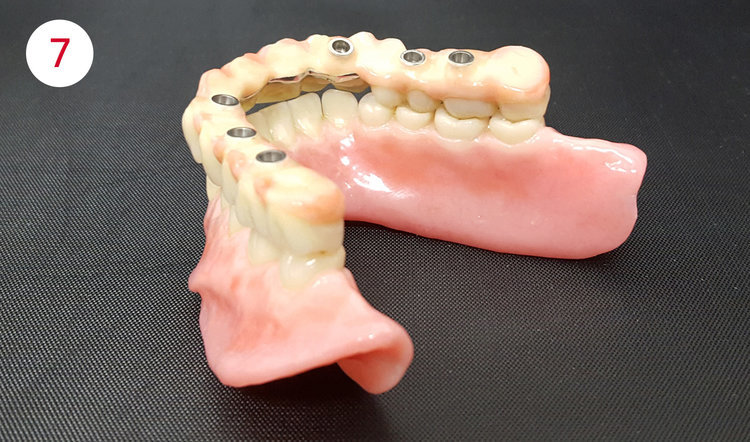 Just as for full dentures, 1:1 lingualized occluding posterior teeth should be used in hybrid dentures. Some dentists and dental technicians do not consider this esthetically so appealing, possibly along with many orthodontists. Nevertheless, the positional stability when chewing, swallowing, and “empty closing” are critical for the denture rather than the esthetic appearance of a sagittal dentition form that is not even located in the visible region.

The mortar and pestle principle developed by Gerber for lingualized occlusion is systematically and contemporarily implemented physically by Condyloform II NFC+. Every posterior tooth is autonomously occlusally stable with BC contacts and A or buccal contacts are avoided thanks to lower buccal wear facets. In this way, forces are systematically directed towards the implant axis or the alveolar ridge. The tooth-to-tooth bulge/hollow or pestle/mortar principle avoids hyperbalance resulting from exclusive support by the upper load-bearing palatal cusps by creating moderate micro joint heads that find their static and dynamic counterpart in coordinated lower micro joint sockets. Associated with this is a self-locating centric contact based on its bulge/hollow geometry. For the first premolars the bulge/pestle and hollow/mortar principle is reversed because, based on findings by Gerber, it relieves the condyle and disk as an anterior ball joint.

The Gerber concept with its lingualized tooth-to-tooth occlusion has long-term advantages for the hybrid denture. Implants are optimally loaded with centric loading along their support lines. The BC occlusion principle based on the Gerber concept from CANDULOR, a specialist dental manufacturer for over 70 years, embodied in Condyloform II NFC+ meets this requirement based on my experience and most of all on the feedback from my customers. It is high time to rediscover this principle and to apply it to this type of restoration by bringing it out of the full denture cupboard. Patients will value the functional stability of their dentures regardless of the type of fixation.

IMPORTANT / You can find the complete photographic material for this article in the PDF of the specialist articles, which can be downloaded below.

The resin for natural and functional dentures.

Customized for the patient to achieve natural and unique authenticity. 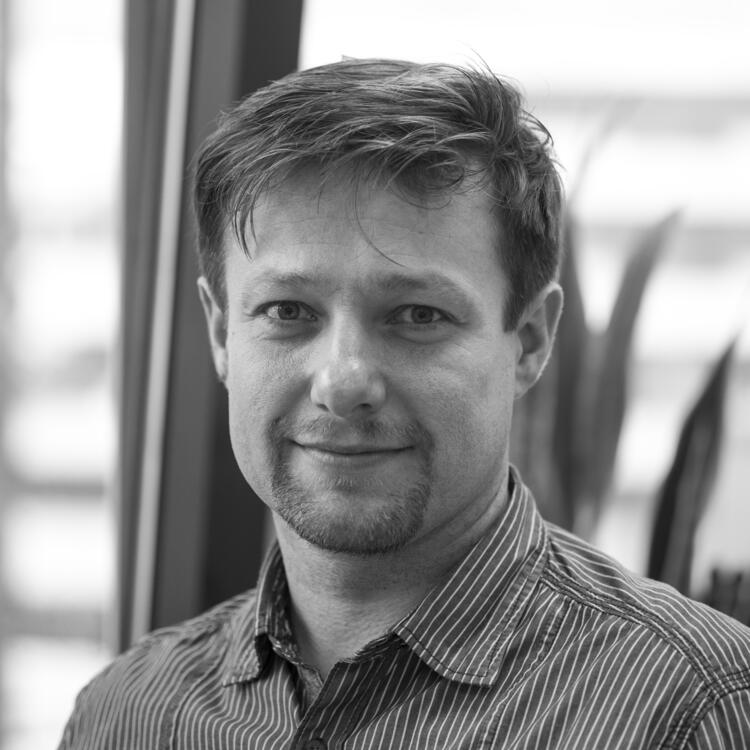 Henryk Jurzyca sat his vocational training examination in 1999, which he passed with distinction, at the HWK Düsseldorf. After his apprenticeship examination, he was employed for several months in teaching activities. Henryk Jurzyca then acquired practical experience in established laboratories covering various key activities. By completing a number of professional development programs, including with Jochen Peters, Jürg Stück, Thilo Vock, Da Vinci Dental and many others, Henryk Jurzyca was able to steadily expand his knowledge and skills and he successfully completed his Master’s examination in 2007 at the Düsseldorf Chamber of Trade. In 2006 he took over management of the laboratory at 2 GZ-Dental in Wuppertal. He continues to apply his formula for success by specializing in challenging and esthetic dental restorations. In 2017 he won 3rd place in the 10th International KunstZahnWerk Competition.

To the overview of specialist articles >